A downloadable game for Windows, macOS, and Linux

You can download this game for free without paying! Pay if you want to support us.

Big Klondike features 1 Draw, 3 Draw, Random shuffles and Winnable shuffles. You can choose to have the Timer enabled or not if you prefer a relaxing experience.

Our Winnable shuffles are originally Random shuffles which our custom coded solitaire bot has play tested to ensure is actually possible. We ship the game with 50,000 known Winnable shuffles for both 1 Draw and 3 Draw variations. The 1.0.0 version of our solitaire bot was made to not be too incredibly clever, so all Winnable shuffles are guaranteed to be possible below 200 moves. Though a Winnable game is guaranteed to be possible, that does not mean you will always win it first time as sometimes moves can be made in ways where the game becomes bricked - impossible to finish in that state. If that happens you can Retry that same game and go for different moves to beat it!

In Big Klondike, cards can be dragged or clicked to move them to possible moves. Right click is also supported.

Once a game is deemed as mostly complete, Big Klondike will show a button to Auto Complete the game and move the rest of the cards into place in the foundations.

Move cards from pile to pile so that the values of cards go from low to high and alternate between both colors with each card.

Click/Tap cards to move them to valid positions. Top cards in a pile with valid descending values and alternating colors can be moved too.

Kings (K) can be moved to empty spaces.

You win when all four foundations have King (K) on top.

When all cards are face up, you can click/tap the Auto End button to automatically move the rest of the cards in order into the four foundations.

Our original goal with Big Klondike was to make a small in size, standalone, clean, customizable, and stable version of the classic Klondike solitaire that was multi-platform (made easy thanks to it being made with Defold), and easy to update.

Part of the design was to keep the design small and size and clean. Due to this, we decided not to include any music with Big Klondike. So you can play your own music while you play.

Another part of the design is in the name, making the game Big. While we have a good start with this, we think we can do better, and so in future iterations will continue to make the game look and feel as Big as possible.

An important personal design goal for me was to make a Klondike solitaire which is enjoyable to as many people as possible. This goal focuses on customization and optional features. For 1.0.0 many of what I have planned is not included, and instead only the basics of customization are included.

The 1.0.0 version of Big Klondike is very vanilla. It's basically just Klondike solitaire. We do have more plans for future development to add more content and features but overall we will keep it geared toward the core focus of just being a great Klondike solitaire version.

If you prefer the 1.0.0 version of BK please download its installers and keep them safe. Though we'll endeavor to stay true to the original goals, adding features and content will inevitably change the original version of the game to be something new and different. If you have played our other games you may have an idea of the kinds of extra content we may add to BK over time that is within our style of game development.

A great solitaire and a very addictive game!

I went ahead and bought this before I forgot. I think I have ALL your games in one format or the other. I love your games and the art work.

I had a bad fall so haven't been able to be on the PC for any length of time. I did download it but haven't installed it yet. I will as soon as my back gets better because these are the types of games that are good to play when you can't do much on the PC.

Thank you for your support!

I know this is five days late. I just want to let you know that I did see this when the alert first hit my e-mail, and I did play it.

The original reason that I became a fan of Faerie Solitaire is because of the world-building and story around a simple Solitaire premise. I hope I don't offend that I only played about five rounds of Big Klondike, at least so far.

Still, thanks to the Fae franchise introducing me to the idea of cards as an appealing pass-time, I did get some enjoyment out of this simple digital piece. I commend you.

We plan on adding more meta content to this game time, but it's just not a game set in the FaeVerse so that's understandable. There will be more FS/FaeVerse games in the future! 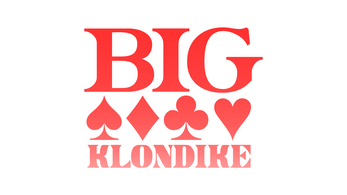 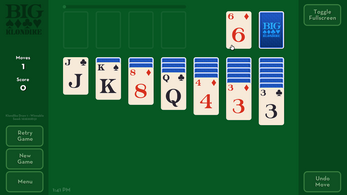 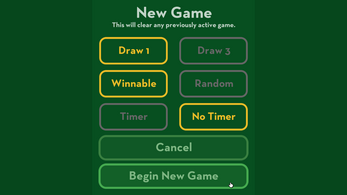 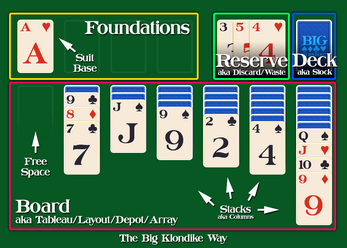